The owl sees everything.

It watches when the young man brings his son into the barn on his shoulders, introduces him to each animal by name.

It regards the expression on the boy’s face when he gets old enough to come in here and hide from the other children who don’t understand why he’s so quiet.

It turns its head as the adolescent counts how many times he strokes the horse’s bare back.

Its unblinking eyes take in the vacant expression of the silent man when he comes into the stable and falls to his knees sobbing.

When someone started using Jenny’s printer at work, she put out a simple memo telling them to stop. Since it was on the network, the ID was just a string of numbers, and she didn’t want to get HR involved. They weren’t using much anyway.

When she came in the next morning, there was a single sheet paper with one line of text: I didn’t know how else to say hello.

At the end of her shift, she responded and printed: Maybe we could have lunch instead?

“I’m trying to decide if I want to kill you tonight.”

“Oh yeah?” John asked, sipping his Merlot, licking his lips to keep them from staining purple. “How would you do it?”

“Maybe a blow to the head–”

“This isn’t the movies, Paula. You’d need something more than that.”

Her blue eyes froze on him, juices pooling under her rare steak. “You didn’t let me finish. That would be to disorient you. Then I’d strangle you.”

If that wasn’t an invitation, he didn’t know what was. “I’ll get the check then,” he finally declared.

Each cupcake required an hour of work to decorate. While other bakeries made slapdash, hurried attempts to get their confections presentable and on the shelves for sale, these were works of art. Gold flakes sat perfectly atop white chocolate pools, while candied cherries created the perfect centerpiece for a buttercream basin. Doilies provided the delicate stenciling for powdered sugar snowflakes atop dark chocolate peaks.

When the bakery was robbed, the safe sat untouched, and the only damage was to the locks on the glasses cases. The owners could only forgive the bandits. Wherever they were, they must have been happy.

She had gone to the store to pick out a gift for a baby shower, and when she returned home, the house was in flames. She couldn’t tear her eyes away, the smoke rolling around her flip-flopped feet, the fire casting orange light against the yoga pants she was only going to wear out that one time.

She got back into the car and took stock of her belongings: her wallet. A tube of chapstick. Her keys. A scratchpad. A pen. A soft teddy bear, which she buckled into the passenger seat.

“Okay,” she said as she started driving again.

When Holly tried the unmarked door at the end of the hallway in her building, it opened like it had been expecting her. She carefully placed the pile of papers in her arms on the floor, copies of a report that meant nothing to her.

A wind blew in excitedly, traveling up her pinstripe skirt, and a honeysuckle scent tickled her nose. Sunlight caressed her sandaled toes, even though she had walked through the rain not long ago that morning. Birds sang softly. Someone called her name.

Holly slipped inside, the reports forgotten, the stack tipped over onto the carpet.

Anybody who tries to say that Creation is easy is a damn liar.

First, you need the foundations: air, water, earth. Animals come very last. Otherwise – woops – Death. You hadn’t even plotted out what that was supposed to look like!

You have to think it through, right? Because with enough time, it’s not like it’s all going to stay like that. You shape and mold and craft and then, oh shit, heavenly bodies.

Lastly, the hard part: giving it away. You hold your breath and hope they like it. Don’t break it.

She ran her hand along the alligator’s ridged spine, her fingers catching on the edges of natural armor. The salty brine smell hung in the air, a comforting brackish blanket over the pier. The cuts of meat splashed as she dropped them in front of the brute, and she shrieked with delight as it devoured everything in quick, violent gulps.

Suddenly, her stomach tightened, and her entire body curled in on itself. The hand sticky with raw juice shot to her pregnant belly. “I should go,” she said.

But she lingered, bargaining with the coming terror as long as possible.

More from our vampire-y character. And another new character. Are you guys enjoying these? Or should I let this character go to bed for a while? Thoughts.

When she came out of the blind rage and back into slow, uneasy awareness, she was in the middle of a field. Her clothes were torn, and her hands felt dry but dirty. Like something had gotten on them and dried into a layer of nastiness.

She puffed out a breath of air that steamed in the cold, wanting to touch her face to get off some of the awful nasty there as well. Finally, she rubbed under her eye with the side of her arm. It didn’t help.

Running a tongue over her teeth, she realized that her fangs had shrunk back into plain canines. That empty, cavernous pit that had opened up in her body had been filled up by something.

She pressed her lips. They were still wet, cold now, but…

Forcing herself to look around, the field opened wide and far. In the distance was a town, but that was a good five or six miles. No houses around. A shell of a barn, but that was it.

So…what did she eat?

I waited too long, she thought. And that happened. I need to not do that again. I cannot wait and wait and wait. I have to find something or I’ll…

She leaped back, eyes wide. It came from a few feet ahead of her, a spot that she had thought was…something else. Even now, as her eyes adjusted in the night of cold stars and only a sliver of moon, it seemed big, bulky, furry. A bear, she thought. A big dog, maybe.

But that sound it made, that was human.

She called out, “Hello?”

The thing – which she realized had been shifting – stopped moving. “You have got to be fucking kidding me.”

The mound turned to her. It was a bear after all — brown, bleeding, huge, with inky black eyes and a snarling muzzle. “After all that shit. ‘Hello.’ How do you fucking do, psycho bitch from hell…”

The bear was talking.

The bear was talking to her.

“I am…so sorry,” she blurted. “Oh my God, you’re a talking bear and I…I don’t even know what happened. You have got to believe me.”

The bear shivered and the grass around it seemed to take a breath. And after a second, it was gone, and there was a man standing there. Tall, black, with scars that looked pink against his chest. He pointed a finger at her. “You. Need to get your shit together.”

Then, as quickly as all of that had been said, he passed out. Naked and bared in the cold air.

Now what the hell was she supposed to do? 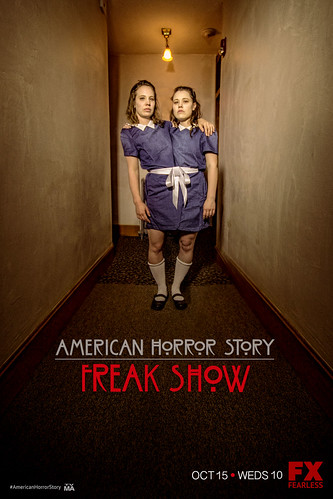 I would definitely like to think that American Horror Story was inspired by my Black Carnival stories. Wouldn’t that be awesome?

Does this count as a Throwback Thursday? Maybe?

Light, then dark, then light again.

The first line in the rough draft of “Working the Dead.”

I met my Day 1 goal. Want to see more? Head over to my page!