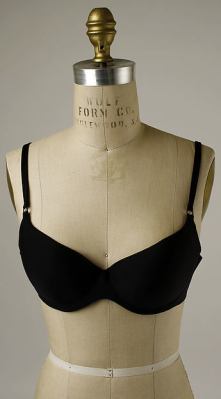 When I was in college, I was vehemently anti-bra.

Not living at home meant I could treat my body the way I wanted. In addition to a steady diet of cheese fries with honey mustard at least four times per week, this meant no restraining bosom barricade. No underwire, no elastic, no duct tape and padding. Nope. The ta-tas were free to take on the world unencumbered. This was so true that it’s become a running joke with many of my college friends:

Me: Have I really changed so much?
Them: Well, you definitely wear underwear more than you used to.
Me: What kind of monster have I become?

Bras were strictly on an as-needed basis, which was pretty much work only. If I was heading out of my apartment on official business (such as when I was being paid for it), I had to apologize to the Captain and Tennille and don the garment of doom.

Fast forward to present. Time and gravity have taught me there is something to be said for having a bit of extra help in the chest area. I’ve also started working from home for my day job, however, and being in pajamas = viva la nipple. Thanks to my college years, I’ve learned that putting a bra on is all I need to trigger my mind into understanding, “Okay, now we’re facing the world. Serious business. Go.” It’s like a super hero cape. A cuppy cape, if you will.

Realizing what daily rituals will flip your switch can be really helpful for knowing how to get yourself to do things other than staying comfortable and unchallenged. Studies have shown that you can create a habit by maintaining a cause and effect. For instance, putting your walking shoes on immediately after stepping away from your work desk can trigger your mind to go outside and get some air. For me, strapping in Harold and Kumar triggers that I am setting out to do work and get stuff done.

What kind of daily rituals work for you? Try a little change and see how it can affect you.

Put your bra on. I dare you.

I’ve been walking through the hills of the rural Pennsylvania for several hours. I am not so much covered in mud as I am carrying it in my clothes, on my skin, in my hair, and tucked away in places it should not be. There are suds sticking all over me, so I can’t wipe my face. My knee is telling me that this is not a good idea, and it joins forces with my calf, shins, glutes. This could all be over quickly if I just cross my arms above my head at the wrists and wait for the golf cart to take me out.

In a few minutes, I’m running up a tarp that’s at an incline. I grab a rope and refuse to let go, but the rest of my body won’t do anything else. There are people I don’t know screaming my name, telling me not to stop. They are grabbing me, pulling me. I stare at one of their bloody knees and I can’t believe that I am trusting so much in these strangers. I’ve never felt so much a part of something. I had thought that around the second mile or so, they would move on, but this group of women said, “We’re going to finish this together” and we do.

A charlie horse starts screaming throughout my leg. “I can’t even walk,” I say. And it’s okay. I’ve come so far. But then I’m standing, waiting for the ride back to the starting point, I feel this insidious sneer from the dark figure, my weakness manifested. It says, “I knew you’d quit. I knew it. Even at the very end, you’re quitting.” So I wave them on, and keep walking. Not just walking. I climb up a rope ladder. I stop and growl halfway, because the devils in the gravity are trying to pull me down. I keep putting one foot and one hand through at a time and then…

I am kissed by running water. Someone helps swing my leg over, and I accept their assistance without apology, without whimper. I’m sitting, staring over the rolling hills to the farms and rainclouds beyond. I let go and plummet down a water slide into deep, cool water. I’m washed clean. When my head comes up, I am whooping, over and over.

I wanted to do Mudderella because it looked like a fun way to test what my body could do. It turned out to be the most difficult thing I’ve ever put myself through. It also made me put my trust and faith in people in a way that I never had before. I never felt shamed, or put down, or given up on. I couldn’t believe the spirit I saw out there on Saturday. It was beautiful and amazing. I challenge everyone to do it.

Force yourself out of your comfort zone. I dare you.

I used to love drama.

Not the awesome spoken word kind, or plays about people kind, or even the crazy Greek ones that had weirder sex than Game of Thrones. No, I used to love hearing all the scoop, all the kerfuffle, all the flibbertigibbet. I was the undercover scandalmonger, who would just happen to be around when the most chaotic people would appear, obviously full of angst about someone else. “You can talk to me about it,” I’d say, “you can get it out.” And I wouldn’t just drink it all up. I would gulp it. I would gorge myself on it.

This only got bigger and stronger with my increasing online presence after college. The Internet is a lot like an adorable card and gift shop. You can walk around forever and ever and keep finding things to pick up and marvel at. Comments sections of news articles about things I already didn’t agree with were the best. Lists of all the things guys find wrong with women? Sign me up. Articles about how awful things I love are? Yes, please!

And I always found these things through my best friends, the people who think like me, the people who go, “This is so messed up” and “Am I crazy to think that this person doing this is not okay?” so that I could join the loud, cheerful choir of “Yes! That is the worst! It’s all awful and we are such better people for not agreeing with that garbage!” Because who doesn’t want to have that with their friends?

At some point, though, I realized that I wasn’t actually enjoying this feeling. I would start getting angrier, and I would seethe and look for any place to release all the fire I thought was building up in my stomach. I got into angry fights with people I had never met, and I would rip them apart. And despite the fact that, sure, most of the causes were pretty justified, I found that a few truths were becoming clear:

This step back also brought a lot of other things on the Internet into focus. I saw how often I just complained and griped. I saw how I would rant about these things that seemed like nothing a few days later. Mountains, molehills, anthills. It became very clear to me how negative I was, and I really didn’t like that. I also realized it wasn’t just on the Internet, that this was affecting the Real Life Me. I had started hiding away when I was angry instead of confronting people close to me. I would seethe and snarl in private, backstab, hurt under a cover of darkness. I had been for a while but now I knew that I was not being a good person. That is something that still haunts me.

So the first thing I did was decide that I was going to stop being utterly negative, both online in social media and in life. I started to recognize when I was repeatedly complaining without taking action. On Facebook and Twitter, instead of posting about how bad my day was, I’d share a cute video that made me smile. Instead of talking about how much something sucked, I would bring up something that I really enjoyed. I used the Internet as a force of good – literally, good things, good news, good times. I felt a lot better.

Recently, it’s become much more apparent that there is a part of the web that is what I call a Hateful Shame Machine. A lot of people use it as not a vehicle for their anger but more like a remote-controlled car they can run into people’s lives. They capitalize on the safety of distance and anonymity to respond in a way that doesn’t directly impact them and hurts the subject of their disdain. But, like with a remote-controlled car, they think what they are doing is only annoying at most and couldn’t actually do any lasting damage.

Have you ever imagined what could happen to a single person being struck by a hundred remote-controlled cars? A thousand? A million?

I’m not saying that it isn’t okay to be mad or to react to something unjust. But once you realize that what you’re doing is not only making you feel toxic but is raising a red flag in your subconscious that says, “This really isn’t good, is it?” it’s time to take a step back. Are you making a difference, or are you just adding to the screaming? Are you being the person online that you are in your heart, or are you wearing a mask? Are you treating everyone the way you would to their face, or are you exploiting the fact that you can attack them without attaching yourself to it?

Most importantly, though, you can stop. You can change. Get some distance. Unplug. Go do something by yourself and clear your head. Forgive yourself. Say you’re sorry, if it isn’t too late. Understand that you deserve love and comfort and every human is cracked and flawed. And if you are the victim, these things all apply to you, tenfold.

I dare you to walk away. It’s never too late.