Wait, wait, it’s really not supposed to be that dramatic…

So this morning, when I woke up, I realized that my brain had become a warzone.

I get migraines of the occasion. Usually they are associated with stress, times of the month, general changes in air temperature, etc. Sometimes, I can get them handled and under control before anything crazy happens. Sometimes, though, especially if they sneak in like invaders in the night, they hit with the ferocity of a summer thunderstorm. There is sound, there is fury, and it signifies my life is ending.

And there was one thing on my mind, in those swirling moments of agony: George R.R. Martin is a damn genius.

Because of this guy: 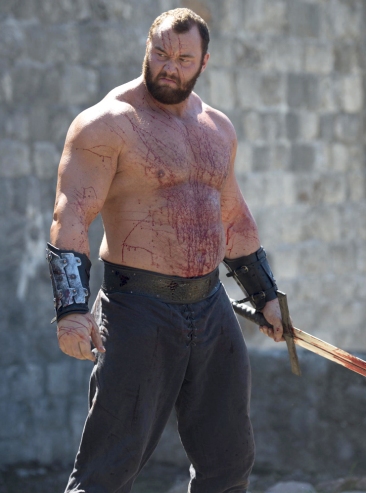 This is Gregor Clegane, aka The Mountain, aka Card-Carrying Member of the Old Boys Club of Suck. We know him. We hate him.

But a little reference from the Song of Ice and Fire series is that he suffers from chronic headaches. He’s always taking milk of the poppy to ease it off, but it’s a pretty constant thing that causes him suffering.

After I read that, there was just this moment, this teeny second, that I stopped and went, “That explains so much.” It doesn’t justify it or make anything he does less horrifying and awful, but for just a moment, I could see why it was happening. It wasn’t some deep thing like, “His parents didn’t love him” or “He was just a product of society” or whatever. There was an actual physical torment that was there, like a creaky board in the stairs, gnawing away at him until he snapped. Not to say he didn’t choose to embrace that, but still — this rocked my world as a writer.

It’s easy to make a monster. But making a monster that can be related to, even on a superficial scale, is something to aspire to.

View all posts by bohemianonrye