It’s still January. I’m allowed to do this. 2014 was a hell of a year, right? Here are the most awesome things that came out of it. 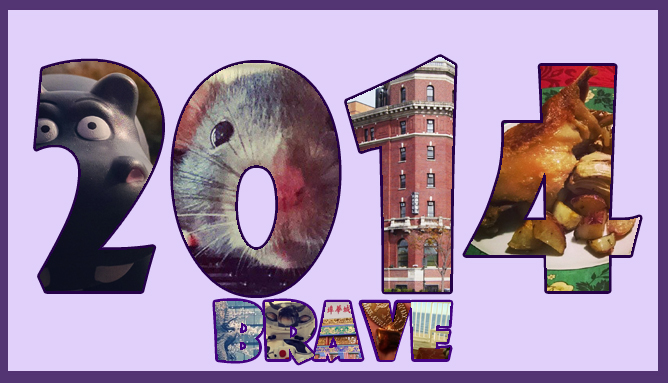 1. Izmee the Hippo: after 5 years of waiting for someone to give me a hippo, I took matters into my own hands. Since then, Izmee has become a constant companion in my adventures. She’s there at new restaurants, she gets to check out the digs at hotels, and she reminds me not to be so serious.

2. Rats: in December, we welcomed into our home three fuzzy brothers who have grown into delightful additions to our family. Chip, Moby and Oreo are like tiny puppies: they lick our faces, they want to interact with us, and they are constantly playful. I’m 100% converted to the way of the rat.

3. The Jane Hotel (NYC): this one is very specific. When I booked my room at the Jane, I was mostly intrigued because it came off as an affordable, private hostel. Now, though, as I reflect on it, the Jane was one of the most inspiring places I’ve ever been. It captures the Manhattan feel of old movies, with its boat cabin rooms and distant view of the Statue of Liberty. I can’t imagine going back to New York and not staying there.

4. Food: 2014’s food was amazing. No kidding. My husband and I did a lot in 2014 to expand our culinary horizons. I baked bread from scratch for the first time. Instead of going out for Valentine’s Day, we had a 5-course dinner at home, including duck confit (pictured here). Looking at cooking as a creative endeavor has changed the way I look at food everyday.

5. Travel: I can’t express how pleased I am with how much traveling I managed to do in 2014. I chose pictures from only a few of my outings, including DC for the annual cherry blossoms, Houston, Philadelphia, Detroit and Virginia Beach (local to where I grew up but my first time at a beachfront hotel). I also visited New York City twice – once by train! – Columbus, Cleveland, Baltimore, and several cities around Pittsburgh during my summer staycation. And I am ready for more!

What were your favorite parts of 2014? I’d love to hear about them!

View all posts by bohemianonrye